Not Charity Work: Why Did a Proud Dad's Post Destigmatizing Autism Go Viral?

Nobody was more surprised than Michael Lisle himself by the tremendous engagement and viral status of his recent LinkedIn post. Michael, an economic developer from Charleston, South Carolina, wrote that he was proud of his son, Noah, for reaching his fourth anniversary at work because of all he has learned and all of his growth in achieving that milestone. He also shared that Noah "happens to be autistic, in the same way that he's blonde, slender, and unintentionally funny." At this moment, that post has amassed 311,580 'likes' and 13,132 comments. Like so many others, I was touched by the words of a father sharing the pride and joy of his son's development. Unlike others, I lead content for Accessibility.com and spend a lot of time thinking, talking, writing, and learning about some of the central aspects of Michael's post. Why did this post get such a response? Should it have? Is that a good thing or a bad thing? The only way to find out was to get to know Michael and Noah.

While some emails and a half hour on the phone together isn't enough time to learn someone's life story, it was more than enough time to gain some insight into Michael's intention when he created the post, to learn about Noah's job at the grocery store, and to dig into some of the causes and effects of their newfound social media fame — so I was thrilled and truly appreciative for their time.

Before moving too quickly, here is the full text of the original post:

Proud of my son for reaching his 4th anniversary working for Publix Super Markets! He has learned so much from working and his self-confidence has grown tremendously as he's mastered new skills in his first job.

It's a great opportunity to remind employers that individuals with disabilities are an essential part of an inclusive workforce. My son happens to be autistic, in the same way that he's blonde, slender, and unintentionally funny. He's also a valued member of his team because his employer ensures that he receives the training and support he needs to succeed.

The full post with a picture of Noah, along with Michael's added updates, are available at the end of this article.

Noah is a front service clerk. He told me that what he likes most about his job is talking to customers and the great people he works with. For anyone in the service industry, it makes a lot of sense for those to be key contributors to happiness and job satisfaction. For anyone who knows Noah, I came to learn, his answer also should not be surprising.

Do people not believe autistic individuals can be social beings and valuable employees?

If you remove Noah's neurodiversity from the equation — not that you should or should want to, but for just a moment to break this down — the story of a young man who is good with people working as a front service clerk in a grocery story may not be newsworthy. That post may not get over 300,000 'likes.'

Could that mean that some of the incredible response and support indicates a level of surprise from many people? Did they not know or believe that someone who is autistic can be a "valued member of his team" in the way that Michael is?

To set the record straight, one of those 'likes' is mine and I'm ecstatic that Michael and Noah are being welcomed into the hearts of so many. I think the numbers prove that he was successful to a very measurable extent in his "hope to destigmatize autism," which he told me was one of his primary intentions.

Still, why did this post go viral to the extent that it did?

"You know, we get so focused on what people can't do, we don't always see what they can do," Michael said. If people don't realize that individuals with disabilities or neurodiversity can be valuable employees, it's mostly from a "lack of understanding, a lack of awareness."

I think that Michael is right.

He went on to call autism "the great unknown" for people not in the community. The best way to change that isn't charity, but inclusion.

He's good at his job. If you teach him something, he gets it.

His employer is running a business, not a charity, and that's a large part of why Michael is proud of him.

"He's been there four years and he's doing so well at his job. That was one of my biggest goals in sharing, to express that I'm proud of him simply for that. Never in my wildest dreams did I think my post would get the response it did," Michael said.

To me, this is the exact point at which everything meets. If this were a chart, this is where Noah's ability and people's amazement intersect; it's where the progress we've made as a society and vast opportunity for improvement overlap as well.

We live in a time where a worker who is both autistic and valuable is remarkable. Should we strive for a little more?

Michael's word choices felt deliberate to me and it turns out they were. I was most interested in a phrase quoted earlier, that Noah "happens to be autistic, in the same way that he's blonde, slender, and unintentionally funny." When I asked Michael to explain, he sounded more animated and enthusiastic than at any other point in our conversation (and we talked about plenty of topics with a lot of meaning and feeling behind them).

First, Michael pointed out to me that being autistic is a "characteristic" of Noah, it's "part of who he is, just like how he bats right and throws left. The diagnosis of ASD [autism spectrum disorder] presents so differently in each person, but for each, it's part of what makes them them."

Then, I asked more specifically about using the term "autistic." For Michael and his family, this is an important and "purposeful" word choice:

One thing I can't stand is reading that someone 'has' autism. For those who describe themselves in that way, I support them, but for us, I personally find it such a disappointing way to express it. It's not a disease that Noah has. It's not a limitation or a stop sign for his dreams. It's a characteristic, and who's to say it's not better?

"Noah doesn't have to wonder whether he's valued," Michael told me. He knows he does well at his job and his employer has been supportive in all the right ways. Some employers, unfortunately, wouldn't know where to begin in order to increase hiring opportunities for neurodiverse individuals.

How can they grow their understanding and improve hiring practices? Here are four ideas Michael offered without missing a beat:

I've made the gigantic assumption that Michael's post would not have gotten the same response if it didn't mention Noah's autism. If I'm right, it tells me two seemingly contradictory things (although I don't see them that way) that others may certainly see differently:

I think we'll get to a place where a father who is proud of his autistic son for doing well in his job isn't shocking, but I don't think we're there yet. Until then, I hope many more families and individuals break down barriers through self-advocacy and awareness. I'll continue to celebrate them. But then I hope we'll get to a place where we don't need to — inclusion will be commonplace, not newsworthy.

I might also be completely wrong. It's possible that this post received hundreds of thousands of likes and comments without mentioning Noah's autism. We'll never know, but I'd gladly choose the embarrassment of my blunder if it means that society has evolved further than I've given credit for. It'd say something about me, and not a positive something, if only I thought there was a story here and only I focused on Noah's diversity while the rest of the world saw only a proud father and happy son.

Frankly, I hope that's the case. 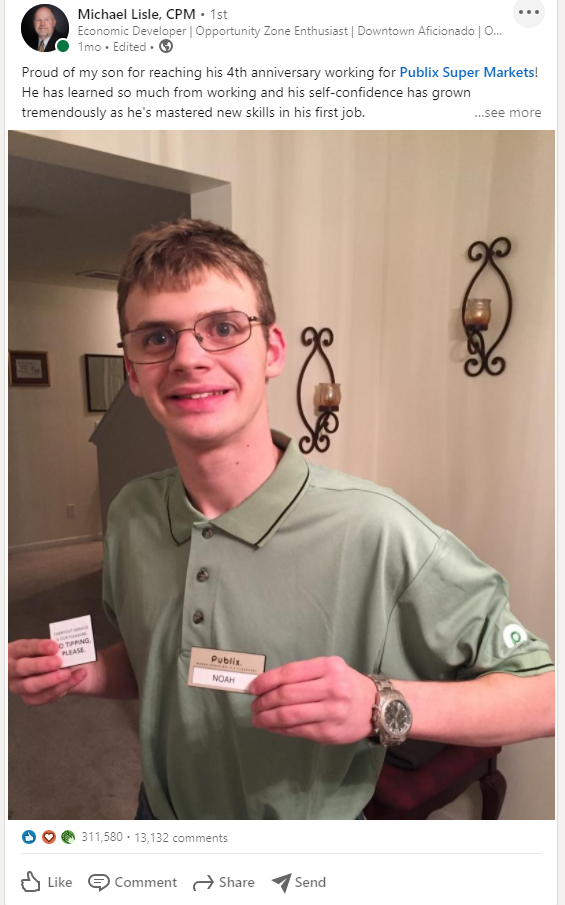 Proud of my son for reaching his 4th anniversary working for Publix Super Markets! He has learned so much from working and his self-confidence has grown tremendously as he's mastered new skills in his first job.

It's a great opportunity to remind employers that individuals with disabilities are an essential part of an #inclusive #workforce. My son happens to be autistic, in the same way that he's blonde, slender, and unintentionally funny. He's also a valued member of his team because his employer ensures that he receives the training and support he needs to succeed.

UPDATE: I'm overwhelmed by the positive response from those who have reacted and commented. My heart is encouraged by you. For those who have taken a moment to send a message sharing your stories, thank you. The neurodiversity can seem very small sometimes, but it's bigger than we realize [heart icon].

UPDATE 2 (23 Jan): I'm completely blown away by how viral this post has gone. Never in my wildest imagination would I have believed the beautiful response our story has received. Thank you to everyone who has liked, or celebrated, or shared your story in a comment. I promise I'm trying to read them all.

At the Intersection of Autism and Social Anxiety

What Is an ADA Coordinator?